If you are already on board with the IELTS preparation, then you must have noticed that the essays in writing task are... 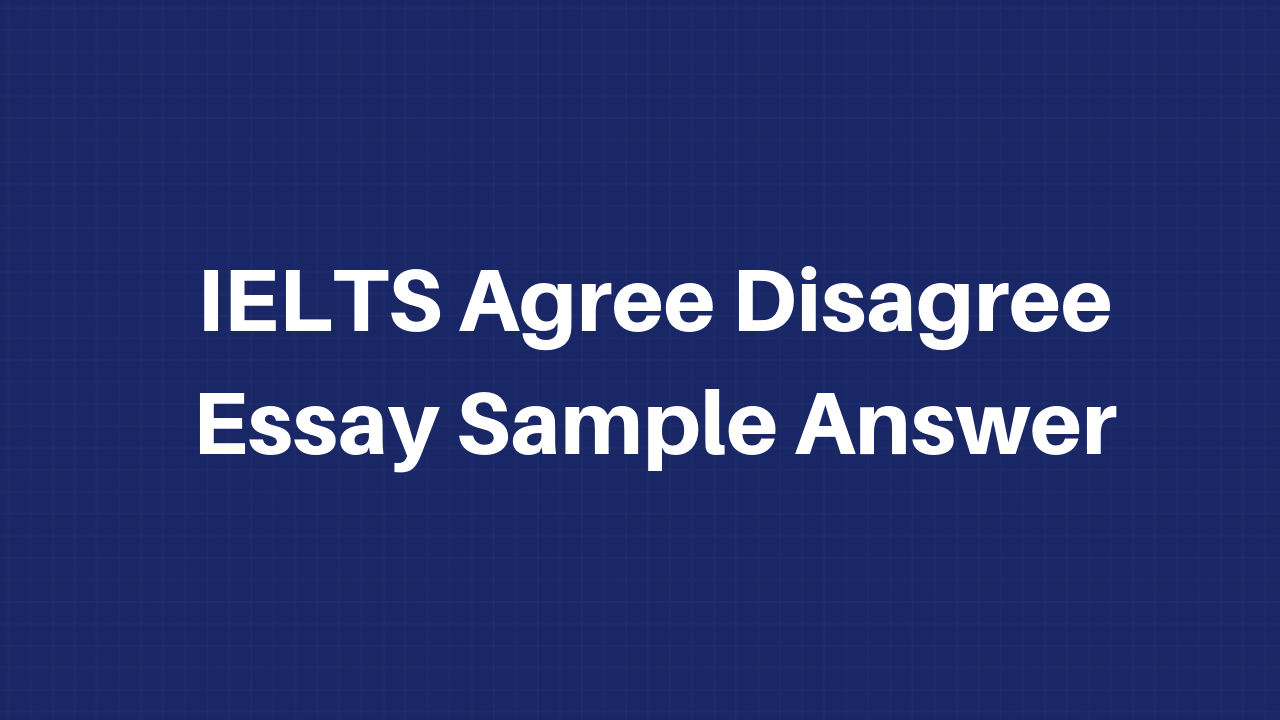 If you are already on board with the IELTS preparation, then you must have noticed that the essays in writing task are quite varied. There are several common types and among them the most popular is the ‘agree-disagree’ type essay.

This is a fairly simple type where you will be presented with an idea or a situation, to which you will have to either agree or disagree.

How to Structure an Agree-Disagree Essay?

You must remember few tips while structuring this kind of essays:

Here is how you should structure the essay:

Sentence 1- Paraphrase of the question

Sentence 2- Explanation of the Topic Sentence

Let us now illustrate this format:

Q. Big salary is much more important than job satisfaction.

Do you agree or disagree? Provide relevant examples if necessary.

Sample of an Agree- Disagree Essay:

Governments should spend more money on education than on recreation and sports. Do you agree or disagree?

It is argued that countries should allocate more funds to education than to leisure and competitive games. It is agreed that national budgets should prioritise schools and universities over sports and play. This essay will discuss firstly, the economic benefits education can bring to a nation and secondly, the social benefits it has; followed by a reasoned conclusion.

Investment in its education system is one of the best ways to improve a country’s economy in the long term. The more students entering third level education, the more skilled a workforce will be and this leads to higher innovation and productivity. For example, South Korea and Finland took the decision to invest a large proportion of their budget in education and this has reaped benefits in the form of high-tech companies such as Samsung and Nokia. However, people cannot work hard all the time and these companies do provide leisure facilities for their workers.

Education is not just about improving the economy it also has many social benefits. Well educated people tend to be more aware of social evils such as drugs, alcohol and sexual health. For example, Singapore educates all of its citizens on the dangers of drugs and this has resulted in one of the lowest levels of drug abuse in the world. Despite this, sports can also teach children valuable soft skills, such as teamwork and work ethic which also help curb social ills.

In conclusion, education should take precedence over sports when it comes to funding due to the many socio-economic benefits it brings. It is recommended that governments continue to pump money into schools and universities in order to realise long-term goals.

Most high-level positions in companies are filled by men even though the workforce in many developed countries is more than 50 percent female. Companies should be required to allocate a certain percentage of these positions to women. Do you agree?

It is argued that corporations should be compelled to give a certain proportion of their executive level roles to females given that that over half of the workforce is female in the West.  It is agreed that businesses should be obliged to assign a significant percentage of top-level posts to women. This essay will discuss firstly, that women should be paid an equal amount of money for doing the same job as a man, and secondly, the fact that girls are currently outperforming boys on many university courses; followed by a reasoned conclusion.

Despite years of so-called ‘equal rights’ for women in the workplace they continue to be underpaid. Many women who do exactly the same job as their male colleagues earn less money and this is unfair. For example, a recent survey of accountancy and legal firms in the United Kingdom found that women earn on average 17% less than men with identical roles. However, this may be due to women taking maternity leave and falling behind their male counterparts.

This unfairness is compounded by the fact that females are currently getting higher grades in most university courses. Even previously male-dominated fields, such as law and medicine, now see women in the ascendency and they should, therefore, be rewarded with top roles. For example, females recently outperformed males for the first time in law in U.K. universities. Despite this, employers should bear in mind that roles should be handed out on merit, not gender alone.

In conclusion, women do deserve an equal share of the good jobs available, namely because they are capable of doing an equally good job as men and are achieving higher academic standards than men at university. It is recommended that companies heed the advice in this essay and make their hiring practices fairer.

Any essay if approached in the right way turns successful. In IELTS writing, it is important to keep in mind that different type of essays need different kind of approach. In case of an ‘agree-disagree’ essay, a combination of good structure and proper information is a game changer. You must therefore spend some time planning and structuring your essay to score Band 9 in IELTS Writing.